If I was invincible, maybe I would take up some extreme sports. ~Tom Welling 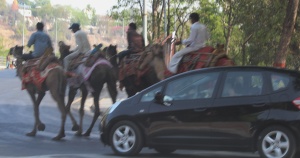 Camels on the Road

During these past few months in India, I have seen an elephant, camels, goat herds led by red turbaned shepherds,  a string of pack horses, water buffalo, chickens, pigs, street dogs, and cows. This would, in general, be unremarkable except that these animals were competing with trucks, cars, motorcyclists talking on the phone while weaving in and out of the lines of cars, smoke billowing, three wheeled auto rickshaws (craziest of all drivers), decrepit busses, bicycles laden with more materials than seems possible to carry, push carts carrying goods to market, and pedestrians for space on main roads. During the monsoon, puddles also abound which may or may not be hiding crater sized potholes increasing the complexity of navigating roads in India.

Goat on a Motorcycle

Most of the animals occur irregularly. I’ve seen the elephant once, the camels three times. By far, the most common animal to encounter, the one which I do on a daily basis, are the cows. Finding them laying in the middle of a busy road slowly chewing their cud occurs at least once every two weeks.  The cars slowly weave their ways around the cows careful not to hit or upset them for they are sacred. I have been told, the stomach of a cow is home to 33 crore (330 million) deities. Considering all the cows roaming the streets and each harbors the deities, the total number of god’s is mind boggling, especially to a monotheist as myself.

Driving in India (YouTube Video of Indian Traffic) requires one to navigate all these obstacles and more. Traffic laws (treated more like suggestions or rules to flaunt) are frequently ignored making a drivers life dangerous most days, unpredictably frightening every day.

Vendor with His Cart

Personal space between vehicles is minimal. Side mirrors are frequently turned in because they just take up excess space which can be used to squeeze a few inches forward at a stop light or get closer to a neighboring vehicle while passing. In traffic, I can almost always reach out of my window and touch another car or motorcycle.

Lane lines, where they exist, are routinely ignored. I have seen a large tree growing in the middle of the road. The road was actually built around the tree with a concrete barrier erected around the tree to protect it from drivers. For a while, the barrier was damaged because it was hit by a car. It is common to see drivers going the wrong way in congested roadways and, when passing, no thought appears to be given for oncoming traffic. 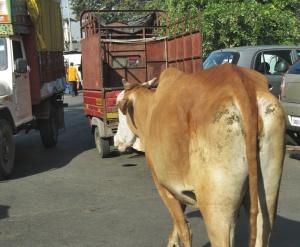 Cow Meandering in the Road at Rush Hour

Communication between drivers is done either by constant horn blowing signaling I’m not stopping so you better, or the extended hand signaling I am cutting into that 3 inches of space ahead of you so you better make way. Basically, the right of way goes to the person with the most courage as vehicles jump in front of other vehicles. At night, it’s frequent to encounter vehicles without head lights. God only knows how they see where they are going. I think they must navigate by instinct.

I do not exaggerate when I say that the traffic in India takes as much skill and nerve as the athletes in the X-Games that flip motorcycles backward, shoot mountain bikes down ridiculously steep hills and fly across ravines while doing a stunt, ride skateboards down high ramps and become airborne while twisting and somersaulting before landing smoothly on four very small wheels.

Like an Extreme Athlete, driving in India requires a high degree of concentration, lighting quick reflexes to avoid the myriad of obstacles that assault the driver more frequently than in the most challenging of video games, the ability to see in all directions at once to avoid the vehicles, humans and animals that materialize out of nowhere like ghosts.

The biggest differences, in my opinion, are that the X-Games athlete must contend with himself and her obstacle for a few seconds at a time while the Indian driver must contend with himself and a host of obstacles for hours on end. And the Indian driver must have the faith of saint that, when he bursts into an intersection (very few actually have traffic control signals), the vehicles coming from other directions will actually stop and let him through.

So far, I have been reluctant to get behind the wheel being content to let my driver navigate the insanity while I sit quietly in the back of the car comfortably distracted surfing the internet from my phone. Despite all the hazards associate with operating a vehicle, I will be taking the plunge into the insanity of motor vehicle operation on the roads of India.

I don’t contemplate this out of folly nor do I have a death wish. For me, not having a vehicle of my own leaves me feeling like a weekend prisoner in my flat. True, I have a driver but I have to arrange for him to get me on weekends. I can’t be spontaneous. I like being spontaneous. True, I can go out for a walk. On foot, my destinations are limited. Many of the local places I want to visit require a vehicle. One such destination is Aga Khan palace. I want to go there and sit for a few hours beneath the branches of the massive banyan trees and just be. I want just be for 2, 3, 4 hours or 10 minutes without having to worry about coordinating a ride.

After the monsoon season passes, I will be purchasing a two wheeler as motorcycles are called here. The choice was fairly simple. I can get an entry level bike for about $1000 US which is less than 10% of what a car goes for. Bikes are nimble and narrow and will allow me to maneuver with relative ease. Bikes are cool. I like being cool.

Initially, I will only take left handed turns (Indians drive on the opposite side of the road as compared to the US) so I don’t have to cross against traffic. Once, I’m comfortable with lefts, I will begin rights and extend my rides further from my home. This will require highly refined navigation skills because street signs are few and far between but that’s a blog for another time. I will follow the helmet law unlike the vast majority of the populace.

In about six months, I will be riding my motorcycle all about Pune, India. Then I will count myself in the rank of extreme athletes, Indian style.

I often find my mind wandering to various subjects, subjects that make me stop and think. The blog, Musings of a Middle Aged Man, is a catalog of those thoughts I muse upon as I search for significance in life. I am the father of 3 children and the grandfather to 2. I spend my days working for a medium sized multinational corporation where I am an Agile Coach. I view myself as a Servant Leader, have a passion for leadership, particularly, in helping people develop their individual leadership skills and abilities. In October 2012, I went to India on business. After a week of being there, I still had not talked to or texted my 7-year-old grandson. He asked his mom, "Is Papa dead? He hasn't texted me all week." To facilitate communication now that he and I no longer live together, I started a blog for us to communicate. It's titled, "Correspondence Between Luke and His Papi". In April 2013, I moved to Pune, India on an 18-month delegation. It's an adventure that was 1.5 years in the making...The experience is captured on my blog, "The Adventures of an American Living Abroad" My two latest blogs are "The Learning Leader", a topic I have been studying since 1990, and "Lipstick on a Pig", a foray into the fashion sense of this middle aged man.
View all posts by David A Olson →
This entry was posted in Adventure, American, Exploration, Explore, Travel and tagged Adventure Sport, cars, Cows, Driving, goat herds, Traffic, transportation, X-Games. Bookmark the permalink.

Keeping the faith of fanatics who feel fired up for anything motorcycles. It’s all about the journey and the philosophy of riding on two wheels. Let’s bring alive the truly unique culture of motorcycling and never let the ride leave the fibers of our being.