What Happened to the Seasons? (India Week #031) 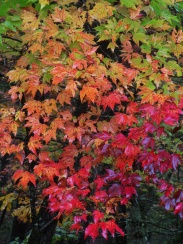 Fall in the Smoky Mountains

I am accustomed to a rhythm of life defined by four distinct seasons – Spring, Summer, Fall, and Winter roughly equal in length bearing unique characteristics. True, in Chicago the past few years, Spring weather has been mostly missing. One day we are suffering another frigid Winter day reminiscent of the dregs of January then the next day flowers pop in all their euphoric glory blanketing the land in colors deemed impossible during Winter. A few days, later Summer descends in all its fury. In India, my home for the past 7 months, the familiar cues alerting me to seasonal change are absent resulting in a bit of confusion.

Fall in the Smoky Mountains

Yesterday, I learned via Facebook, it’s getting cold back home and the leaves are exploding in reds, yellows, oranges. Leaves don’t change color in most of India definitely not where I am living. The changing colors is about the only thing I miss with respect to cold weather. Well, leaves changing and semi-frigid nights which help me descend into a sound slumber. For me, any temp above 60F is not conducive to restful sleep so, most nights, I go to bed with the AC on and the ceiling fan blowing the cool air over my sweaty body.

Temps and Sunlight
Here, the temps have not dropped, have barely fluctuated. It’s the beginning of November, or so says the calendar, and the next 1o days are calling for highs of 90 deg F (32 C). When I arrived on 30 March 2013, the highs hovered around 100F (38C) for weeks on end. They tell me it became cooler during the Monsoons. There were the constant clouds blotting out the sun then along with incessant rains leaving everything feeling uncomfortably damp during that period but I didn’t feel it was noticeably cooler.

The amount of daylight here fluctuates by just a couple of hours the year round, 11 min to 13 max, so I missed that cue too. I work most days until after sundown so evening sun is a relative rarity for me. In Chicago, there is significant change in daylight hours from the 15 hours on 21 July until 21 Dec when it drops to a mere 9 hours. The decreasing daylight hours (and the lunacy of changing clocks back by an hour in November and plunging most of nonworking hours into darkness) is a cue that works on my body clock triggering a subconscious knowledge that the seasons are in flux.

Holidays
Back home, Labor Day signals the end of Summer (not the real end by the psychological end) and the start of the school year. Schooling follows a different calendar in Pune thus has been in session for a couple of months. I didn’t experience my grandson starting the 3rd grade. Fall holidays in the US include Columbus Day, a celebration of when the pestilence named Columbus invaded the Americas (a day I simply refuse to celebrate on moral grounds for he was a nasty, nasty fellow known for cutting off the hands of Native Americans when they were unable to contribute gold to the invaders). I also missed Halloween, a time to attend parties wearing costumes many which, I feel, are a releasing of alter egos. We are deep into the holiday season in India, a season which is significantly out of rhythm with my accustomed life.

The holiday season started with the Ganesh festival, all ten days celebrated, this year (festival dates upon the lunar calendar), during September, followed by the nine days of Navratri honoring the goddess Durga celebrated in October. Today marks the beginning of the biggest Hindu holiday of all, Dawali – the festival of lights, lasting five days, which finds many of my colleagues heading back to their native places for extended visits. Like Christmas in the US, my office will be pretty much empty next week.  I will be one of the few working in the office once the two company holidays on Monday and Tuesday are complete. Most likely, I will spend significant time working at home during these two days or working at my favorite weekend haunt, Cafe Coffee Day.

While experiencing new cultural festivities is enjoyable, these Holidays don’t hold emotional significance in my life so my celebrations lack the fervor of the locals. At least, so far. Perhaps, next year when they decorate my life during my second year in India, I will feel differently. I sure hope so.

My Autumn
Writing this, I have come to realize that I am deep into the Autumn of my life. How deep I don’t know. I do know it’s not my Winter because my hair is not yet snow white – I cling to the traces of red which have become strawberry blonde. I find it astonishing that the Spring and Summer of my life have passed so quickly. It seems like just last week that I was in High School and just yesterday that my children were born. Yet, I find myself a father to three amazing grown children and a grandfather to a wonderful nine year old grandson.

Unlike the seasonal Autumn which signals the winding down of life, the beginning of death, my Autumn finds me still learning signifying that I am growing, living, indeed, I find myself to be thriving during this season. I am learning as much about myself, life, and people during my stint in India as I did when I made the transition into parenthood. The biggest difference I see is that I have twenty six years more wisdom to draw from while in India than I did when my kids first blessed my life.

This is wisdom bestowed upon me by my parents when I asked for advice raising my kids, wisdom gifted to me by my children as I struggled to be a somewhat effective parent, wisdom gained from struggling to overcome the obstacles my shortcomings seemed to constantly throw in my path.

Wisdom  is something that should be shared for the benefit of others. I share my wisdom with my daughter as she raises her son (but only when she asks) and I attempt to utilize my wisdom with the colleagues I have been asked to shepherd into being the best of the best team at my office. They are a bright and ambitious group so I am confident they will succeed. I also pray I can be wise in all my relationships.

Other than the season spent raising my kids to independence, I am finding my Autumn to be the best season of my life. And, being that I am still in my Autumn, I expect my life to get better and better with each passing year….until my Winter when I hope to be wise enough to enjoy the final season of my life on earth.

I often find my mind wandering to various subjects, subjects that make me stop and think. The blog, Musings of a Middle Aged Man, is a catalog of those thoughts I muse upon as I search for significance in life. I am the father of 3 children and the grandfather to 2. I spend my days working for a medium sized multinational corporation where I am an Agile Coach. I view myself as a Servant Leader, have a passion for leadership, particularly, in helping people develop their individual leadership skills and abilities. In October 2012, I went to India on business. After a week of being there, I still had not talked to or texted my 7-year-old grandson. He asked his mom, "Is Papa dead? He hasn't texted me all week." To facilitate communication now that he and I no longer live together, I started a blog for us to communicate. It's titled, "Correspondence Between Luke and His Papi". In April 2013, I moved to Pune, India on an 18-month delegation. It's an adventure that was 1.5 years in the making...The experience is captured on my blog, "The Adventures of an American Living Abroad" My two latest blogs are "The Learning Leader", a topic I have been studying since 1990, and "Lipstick on a Pig", a foray into the fashion sense of this middle aged man.
View all posts by David A Olson →
This entry was posted in Culture, Expat, Holiday, India, Introspection, Work and tagged Autumn, daylight hours, Dipawali, Diwali, Durga, Fall, Festivals, Ganesh, Goddess Durga, Growth, holidays, India, Navratri, Pune, Seasons, Smoky Mountains, Winter. Bookmark the permalink.

1 Response to What Happened to the Seasons? (India Week #031)

Keeping the faith of fanatics who feel fired up for anything motorcycles. It’s all about the journey and the philosophy of riding on two wheels. Let’s bring alive the truly unique culture of motorcycling and never let the ride leave the fibers of our being.