A painter once told me that I’m like the Khajuraho, which you see once but which remains with you forever. I thought that was exquisite. ~Vidya Balan

No Time To  Center

I planned time for soul reflection in India, the country I consider my second home. I figured a large block of meditative time at Bodh Gaya sitting in the cooling shadow of THE Bodhi Tree deep in the aura of praying Buddhist monks and nuns. But Air India shit on that plan. Varanasi, the holiest city on the holiest river in India, promised to be a place of profound reflection.  The city was an onslaught of sensory stimuli from every direction, a whirlpool of insanity in which I barely kept emotionally afloat induced an agitation in my spirit I preferred to ride than to soothe.

The result of not having reflective time, I was riding an emotional bicycle precariously hovering between balance and crashing. In the real world, aka home, I write at least 1/2 an hour every weekday to maintain cognitive equilibrium. Since our visit to the Golden Temple, where I was able to sit for a spell and experience Sikh spiritual energy, I found myself unable to float in the river of universal consciousness flowing through India, my second home, let alone find a tranquil oasis to refresh my soul.

When traveling, I like…need…time to slow the hustle and bustle creating space to reflect on the experience, chew the images careening through my head and extract understanding, hopefully, discern their meaning for my life. I want to answer questions; What should I have seen in the faces of the devotees? How will I grow from the experience? Who the hell am I today? Did the clouds swimming across the dolphin sky cast shadows shapes that, when meditated upon, would reveal glimpses into the secrets of the universe?

Were my expectations too high for this trip? Perhaps. But if one does not strive to suck nectar from the breast of life, one will never experience the sweetness gliding over the tongue.

We arrived at the newly built Khajuraho in the late afternoon. It’s a small airport decorated with a human-sized replica carvings from the monuments. A couple of Western men in tour groups on the same flight as ours thought it would be funny to grab the oversized breasts of women in the mural for a picture. The cultural insensitivity was beyond astonishing. It took me some effort to calm myself.

The concrete parking lot harbored three cars, the short trip to our hotel encountered nearly empty roads. This India was as tranquil as Varanasi was chaotic. We found it hard to believe we were still in the same country.

We stayed a Clarks Khajuraho Hotel, like Khajuraho the city, an oasis of calm. The buildings were elongated, two floors in the shape of a crescent moon with the center a vast green area for relaxation and a swimming pool for relief from the heat. The first morning after arrival I carved out significant time from our hectic travel schedule for reflection. I awoke at sunrise and quietly left the room while my wife slept and wrote for a couple of hours. When my wife was sufficiently rested, we took a leisurely breakfast then sat together on a two-person swinging seat and did absolutely nothing. It was marvelous. Close to noon, our ride came and dropped us off at the monument.

We spent a good 6 hours leisurely wandering the complex making sure to visit every one of the dozen or so, mostly exquisite, temples. There were few people there so we never felt rushed. We were able to examine every temple with an unhurried state approaching tranquility. 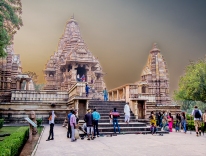 There Were Many Elephant Carvings

Me at a Temple

Temple with Many Carvings

Butts were a common subject 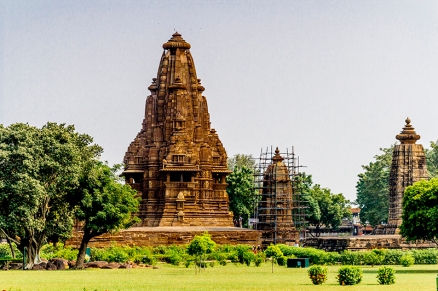 Most Had Large Breasts 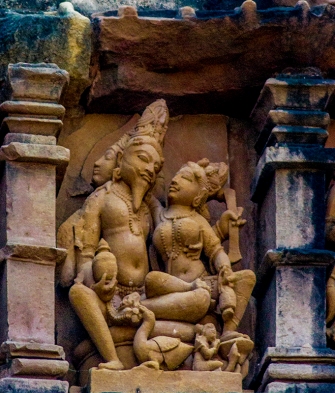 Sunset at the Oasis

Hidden in a Corner 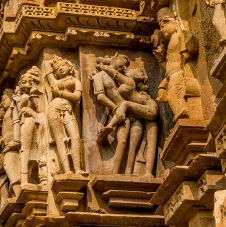 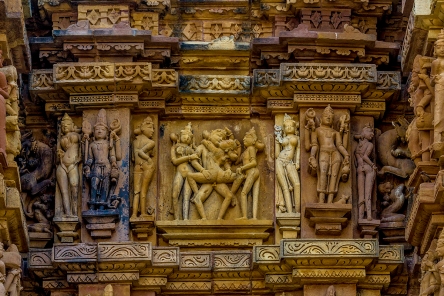 Panel in Near Pristine Condition 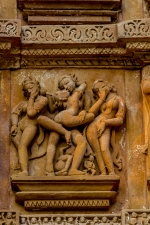 Khajuraho was the last calm in the otherwise turbulent trip. Our flight the next day was delayed six hours, again because the awful pollution in Delhi brought air travel to a near standstill, during which we sat in an airport without a restaurant. Jet Airways customer service was far superior to Air India. They came out from behind their desks to give us updates and, at the appropriate time, handed us connection tickets with apologies for the inconvenience.

Upon arrival in Delhi, they shuttled us from one flight to another because walking would have caused us to miss the flight. It was the last flight that night to Mumbai so we could not afford to miss it. The one problem we experienced was our bags missed the connection. We would spend most of the next day fretting their arrival. We had a very early flight back to Chicago so, not getting our bags meant they would likely spend their remaining life in luggage limbo.

In large part, the chaotic nature of the trip, especially the flight problems and lost luggage, did not sit well with my wife. She vowed never to return. When I come again, and I will because I consider India to be a second home, it will be a solo trip.

I often find my mind wandering to various subjects, subjects that make me stop and think. The blog, Musings of a Middle Aged Man, is a catalog of those thoughts I muse upon as I search for significance in life. I am the father of 3 children and the grandfather to 2. I spend my days working for a medium sized multinational corporation where I am an Agile Coach. I view myself as a Servant Leader, have a passion for leadership, particularly, in helping people develop their individual leadership skills and abilities. In October 2012, I went to India on business. After a week of being there, I still had not talked to or texted my 7-year-old grandson. He asked his mom, "Is Papa dead? He hasn't texted me all week." To facilitate communication now that he and I no longer live together, I started a blog for us to communicate. It's titled, "Correspondence Between Luke and His Papi". In April 2013, I moved to Pune, India on an 18-month delegation. It's an adventure that was 1.5 years in the making...The experience is captured on my blog, "The Adventures of an American Living Abroad" My two latest blogs are "The Learning Leader", a topic I have been studying since 1990, and "Lipstick on a Pig", a foray into the fashion sense of this middle aged man.
View all posts by David A Olson →
This entry was posted in India, Travel and tagged Erotica, Khajuraho. Bookmark the permalink.